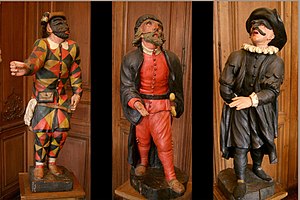 Flaminio Scala was an actor/manager of one of the most pre-eminent commedia companies of his time.Â  A contemporary of Shakespeare, he was an innovator in that he actually wrote his scenarios down.Â  Before Scala, scenarios were never written down as they were afraid of being stolen- they were the gold with which you could make hay, and what distiniguished your company from the other companies.

In case you are unclear, commedia didn’t have scripts- they had scenarios.Â  The major plot points were a given, but what the actor’s actually said and did was improvised.Â  I liken this part of commedia more like a basketball game– everyone knows where the hoop is, and everybody knows that’s where I’m going– what moves I use are up to me.

As actors, one can imagine that over time they developed 3 or 4 sure-fire moves, but they also felt free to change, adapt, and manipulate what happened to better fit the news of the day, or a special occasion, or a mistake that was made.

As most of you know, in a commedia company, no matter your age, you played your character for life.Â  Scala played the role of the star-crossed lover Flavio well into his 60’s.Â  He played with his wife Ursula, who played his counterpart Flaminia.

There exist many letters between Scala and Florence ‘s Don Giovanni de ‘Medici . who hired Scala’s troupe many times, and show the professional nature of the services provided by an actor and company to a court.

Scala left over 50 plays (printed in 1611) and 30 of them were commedia scenarios.Â  (The other were (surprisingly) tragedies, and some light amusements that don’t quite make it as a play.

Although I couldn’t find any Scala scenarios online, I Sebastiani, a Boston based commedia group, has an excellent collection of a number of original (and not so original scenarios on their webpage:Â  http://www.isebastiani.com/Scenarios.html

For a script based on a scenario, The Golden Stag Players (a Society of Creative Anachronism Company from San Francisco) has based this play on a Scala scenario : The Twin Captains (PDF)

They performed it at a commedia dell’arte festival in Austin in 2001.Â  Note that this is a script, and not a scenario.

The Glorious Ones, a commedia dell'arte musical

A recent musical called The Glorious Ones, features Scala as a main player.Â  Read more about it here.

If you’d like to read Scala’s scenarios, you can look for Flaminio Scala on Amazon

, but I warn you, the books are expensive.Â  Try your local library first.