Giants of Commedia: Gozzi vs. Goldoni

Gozzi Vs. Goldoni in a battle of the Ages!

During the mid-1700’s, (over 100 years after Flamino Scala) two commedia performers/playwrights were having a feud over the future of commedia.Â  They were both named Carlo, they were both Venetian, and they both had very different ideas about what made commedia dell’arte special and worthwhile.

Carlo Goldoni (1707-1793) was for getting rid of the masks and improvisatory nature of commedia and focusing on scripts and situations.

Making plays wittier, classier, and more suitable for the audiences (upper crust socialites and the burgeoning bourgeoisie) .Â  His plays (such as The Servant of Two Masters and La Locandiera (The Mistress of the Inn) featured commedia characters, but they were in situations that the audience could recognize and empathize with. 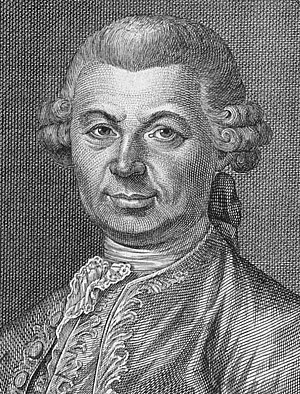 Carlo Gozzi (1720-1806) was more interested in the fantastical elements of Commedia- outrageous masks, improvised scenarios, and magical and unexplained phenomena.Â  His play The Love of Three Oranges features a king who will die if he doesn’t smile orÂ  receive 3 oranges.Â  Another of his plays, the King Stag features a magical transformation of the hero into a deer and a lie-detecting statue.

It would be the difference between the old Cirque du Soleil (ragtag street performers who managed to spend every last dime on their tour) vs. the much more corporate Cirque du Soleil of today.Â  Not passing any judgements, mind you– but there is a different aesthetic and a different sense of immediacy.

My personal aesthetics run more towards the Gozzi side than the Goldoni side, but I appreciate both.Â  There is something wonderful and vulgar and captivating about thinking of these performers not as super-stars on a stage, but in an open market set competing with mountebanks selling fake medicine, tin cups disguised as pewter, and all manners of farm animals.Â  They had to come to the market and win the audiences with their skills.

The graphic poster above comes from an Italian project that completed in 2007 called Gozzi vs. Goldoni.Â  You can find out more about it here.

Read some of Goldoni’s comedies here

A pretty good description of their feud is here