Toy Theatres: Worlds in Miniature is an exhibit starting July 13 at San Francisco’s Museum of Performance and Design.

The exhibition features 21 rare toy theatres dating from the 18th century up to the present, drawn from seven different countries including the United States, England, France, Germany, Spain, Denmark and Mexico. Along with the theatres, the exhibition will display printed sheets of scenery and costumed characters and will also feature video excerpts of toy theatre performances.

Join themÂ  for the opening reception Tuesday, July 13 at 6:30 pm. The evening will include a video presentation by the exhibitionâ€™s guest curator William Eddelman, Associate Professor Emeritus, Stanford University. 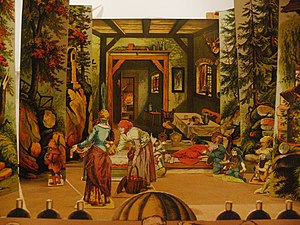 Toy theatres were miniature paper theatres, utilizing costume and scenery designs derived from the contemporary theatre. Toy theatres had their greatest popularity in the 19th century, and the theatres, scenery and characters were sold in paper sheets, which were then mounted on cardboard, cut up and used for home performances of popular plays of the time, often representing fantastic imaginative settings.

In modern times, with a resurgence of popularity in these magical, miniature worlds, filmmakers as diverse as Terry Gilliam (The Imaginarium of Doctor Parnassus), Julie Taymor (Frida) and Ingmar Bergman (Fanny and Alexander) have been inspired to use toy theatres and paper figures in their films.

For more information about the exhibit, visit the Museum of Performance and Design’s website.